Traditionally, I associate covering with a patriarchal, submissive mindset. But lately, I am finding that my view of headcovering has been challenged – and I am grateful for it. I have been congregating on Facebook with the group Covered in Light – a discussion list for Pagan women who cover, and it’s been an enlightening experience.

Being among women who choose to cover for their own reasons, outside of a patriarchal society has been very empowering. Choosing to cover because it is my choice and not something that is ‘required’ of me by a tradition holds appeal for me. I don’t know how much of it is a ‘calling’, per se, but a friend of mine brought it up recently, and so I thought I would try on the veil for a while to see if it fits. So far (about 2 weeks in), it seems that it does.

There are several reasons why Pagan women choose to cover. For some it seems to be an issue of modesty. For others, it is about reverence; to remind them that there is something ‘above’ that we have a connection to. Still others find that wearing a cover ‘quiets the head’. I’ve also read about women covering to ‘fit the role’ that they are in at this time in tier lives; to mark them visibly as ‘taken’; to remind them of the religious/spiritual state, obligation, vow or other tenet that they follow in their personal practice. The reasons are as varied as they are personal and it’s been interesting to read about the whys of taking on the veil.

I think  those are interesting reasons. For me, personally, I find that several of those reasons ring true for me. I like the idea that my relationship with deity is personal. My hair, which I do keep covered completely when I veil, is only let down for my husband (which I view as a sacred bond and comprises part of my personal practice), and for ritual. At all other times, I have been keeping it completely bound and covered.  That They see me as no one else does (other than my partner, who is here by Their doing) is special to me. I also like the distinction that being veiled creates. It’s not so much something that others take note of, but something I choose to do – a difference I see for and within myself. The veil is a constant reminder of Them and my connection to Them.

Since headcovering is not traditionally associated with Paganism, some question as to whether or not wearing a certain style of headcovering is appropriate for Pagan women. For example, can a Pagan woman wear a hijab or niqab style covering? What about a traditionally Jewish style tichel or a cap bonnet, which is generally seen in the Amish community?

The general consensus among Pagan women is that the style of headcovering will vary from woman to woman (and perhaps from day-to-day). Whatever you are most comfortable with or find personally pleasing to wear is fine. Some women cover with hats, or allow part of their hair to show while others prefer to have all of their hair covered; it really is a personal preference or what one feels called to do. However, when wearing an easily recognizable style (such as a hijab), one should be prepared for questions that may arise.

There seems to be two camps among veiled Pagans – those who cover their head and those who cover their hair. For some, a bandana or similarly folded bit of material that leaves bangs or the back of the hair visible is acceptable; for others, covering all of the hair is preferable. Still others consider themselves covered if they wear a hat while others cover hair and dress modestly and/or in ‘plain’ dress. I think this is a matter of style and choice – and if one is ‘called’ to cover, consider what deity is asking of you. I prefer to have all of my hair covered, or at least the length of it covered, but may choose to wear bangs eventually. So… how does one go about covering? For me, it was as simple as making the decision to do so, then wearing a scarf. I have worn fashion scarves in the past; many times, so it wasn’t an entirely foreign concept to begin with. I have several that I have been wearing, but anything will do, really. I have learned about ‘underscarves’ and layering scarves for dramatic/aesthetic effect, and for practicality – slippage.

Slippage is bad and underscarves can go a long way to prevent it from happening to you! There’s nothing worse than working to get your scarves adjusted just right only to have them slip and fall off halfway trough the day. I’ve learned about making them on the cheap (using the sleeves of old tee shirts) to buying them (in anything from cotton to velvet with velcro closures) to using fabric headbands from the dollar store. I’ve learned why scarves might be worn and then covered up completely with another layer and that it actually seems to be cooler in the super hot Texas weather with a cover than without.

In all, this has been an interesting experiment. I don’t know if I am going to be veiled for the long haul or not – I haven’t decided. Though some feel ‘called’ to veil, I haven’t yet; I came to covering because a friend of mine feels called to cover and I thought that since my own perspectives were so negative, that perhaps I could learn something new; and I have. Whatever my personal status, I can definitely say that my perspective has changed, and that I have a new respect for the veil.

This entry was posted on June 7, 2012 by Rowan Hale. It was filed under Daily Pagan Practice, FAQ, Pagan Community and was tagged with connection to deity, daily pagan practice, headcovering, personal practice, veiling. 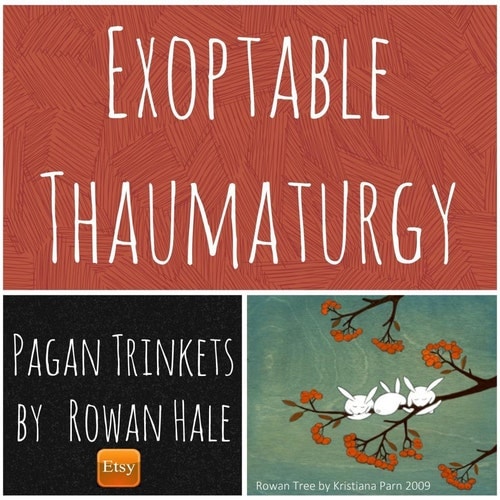 "On every full moon, rituals ... take place on hilltops, beaches, in open fields and in ordinary houses. Writers, teachers, nurses, computer programmers, artists, lawyers, poets, plumbers, and auto mechanics -- women and men from many backgrounds come together to celebrate the mysteries of the Triple Goddess of the Dance of Life. The religion they practice is called Witchcraft." Starhawk

"Witchcraft is not evil. At least not any more than lighting a votive candle, praying for a sick friend, or carrying a lucky charm is. However, there are some who do view witchcraft as evil. This is only because organized religion (primarily the Christian church) has conditioned them to fear anything which strays from their narrow condemning view. After all, if you have the ability to fend for yourself, solve your own problems, and choose your own method of spiritual expression, why would you need the confined structure of a church?" Lady Sabrina

"We are not evil. We don't harm or seduce people. We are not dangerous. We are ordinary people like you. We have families, jobs, hopes, and dreams. We are not a cult. This religion is not a joke. We are not what you think we are from looking at T.V. We are real. We laugh, we cry. We are serious. We have a sense of humor. You don't have to be afraid of us. We don't want to convert you. And please don't try to convert us. Just give us the same right we give you--to live in peace. We are much more similar to you than you think." Margot Adler